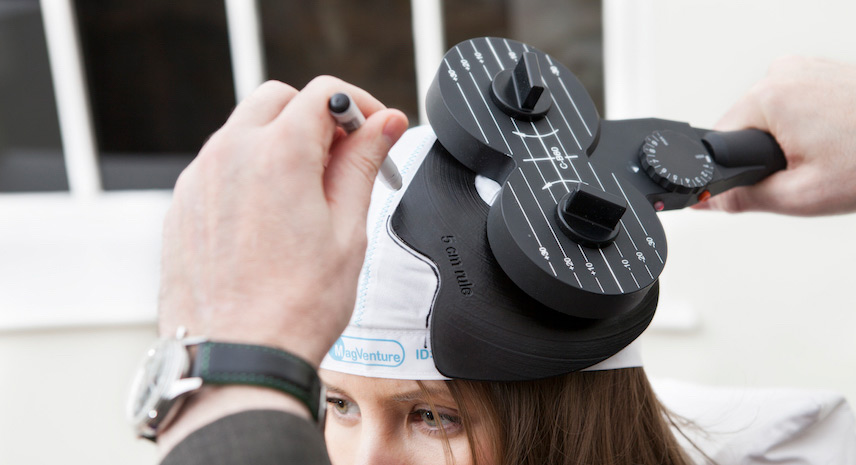 Depression is a complex condition which can affect all areas of your life. Repetitive Transcranial Magnetic Stimulation (rTMS) is a cutting-edge, non-invasive depression treatment.

If you are suffering with depression, you are not alone. At any given time, around one in ten people are living with depression or anxiety. It is believed that there are still many people undiagnosed. Despite the prevalence and devastating impact that depression can have on people’s lives, many sufferers, with the best of intentions, try to ‘soldier on’, not wishing to ‘trouble’ people with the problem. Sadly, if left untreated, depression often gets worse over time.

Major depressive disorder (often referred to as clinical depression) is a serious issue. It is distinct from a passing low mood and, though it may sometimes at least in part stem from some troubling life event, once it has developed, it becomes a generalised feeling. In other words, if you are suffering from depression, you need not have had a ‘bad day’ in order to feel bad.

The condition can put a strain on every aspect of life, including your ability to work, build and maintain relationships, concentrate, and socialise – in short, your overall quality of life and productivity. Sadly, the problem also affects physical health too. For example, depression has repeatedly been associated with an increased risk of heart attack and stroke.

Depression is a complex condition, and no two sufferers will feel exactly the same way. However, there are some general symptoms that doctors have identified as being common, such as a persistent low mood, lack of energy, reduced interest in life and problems with concentration.

If you are suffering from Depression, you may be likely to experience the following symptoms:

+ - What Can I Do When Prescribed Treatments For Depression Don’t Work?

The most commonly prescribed treatments for Depression – antidepressants and talking therapies – sadly do not always work. In fact, treatment-resistant Depression is all too common. Research studies have shown that up to two thirds of people with Depression continue to suffer with symptoms despite taking antidepressants and/or undergoing psychotherapy. Up until very recently, little or nothing could be done for these people.

In other cases, the side effects that can result from medication – such as weight gain, decreased sex drive, sleep problems and tiredness – can put such a strain on a sufferer that taking the medication just doesn’t seem worth it.

+ - How Does rTMS Treat Depression?

Brain imagining techniques have shown that people suffering from depression often display insufficient glucose metabolism levels, lower blood flow in the left dorsolateral prefrontal cortex (DLPFC) and altered activity in the limbic system. In treating depression, rTMS therapy directly addresses the DLPFC – which is an area a few inches above the temple beneath the skull. This area is highly interconnected with limbic structures, which, as explained, also play an important role in clinical depression and the regulation of mood.

rTMS induces a magnetic current in the DLPFC to regulate the flow of interactions between brain cells, so as to relieve the depression. Stimulations last under a millisecond.

Studies have indicated that rTMS increases levels of serotonin and dopamine, responsible for regulating ‘feel good’ and reward responses.

If you are experiencing depression, you’ll know how much of a drain it is on all areas of life; causing personal relationships, self-esteem, not least productivity itself to suffer. We spend on cars, kitchens and holidays when it is actually health that is our most precious asset.

rTMS offers patients an opportunity to experience quick and long-lasting relief from depression without the inhibiting side effects that can come with antidepressant medication. Indeed, for many patients, it has proved to be the most significant investment they have ever made.

If you are suffering with depression, there is a solution. At The London Psychiatry Centre, all our help is completely confidential. Our experts will take the time to assess you thoroughly, to ensure rTMS is right for you.

With the right help, feeling good again is within your reach. 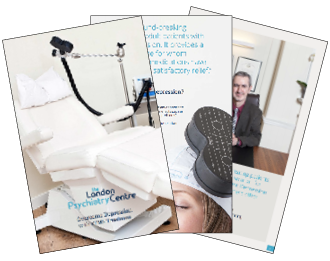 RTMS AS COMPARED TO ECT

ECT has been traditionally regarded as the most effective antidepressant treatment. However, a recently published large study compared rTMS to ECT and concluded that rTMS is as effective as ECT in non-psychotic depression, but unlike ECT, rTMS did not produce any memory impairment.
Source: Ren et al. Repetitive transcranial magnetic stimulation versus electroconvulsive therapy for major depression: A systematic review and meta-analysis. Progress in Neuro-Psychopharmacology & Biological Psychiatry 2014; 181-189